Posted by LIT library at 2:00 AM No comments: 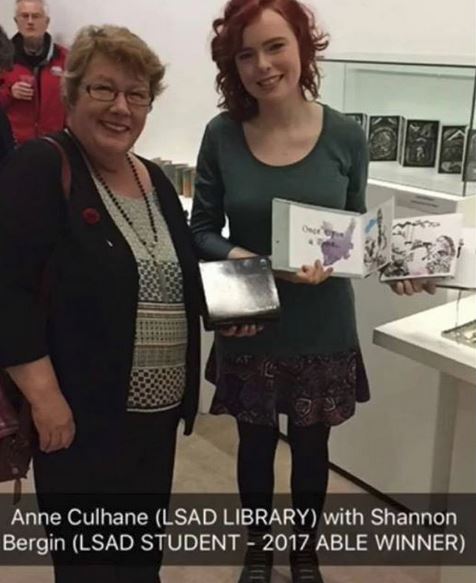 Posted by LIT library at 1:43 PM No comments:

We were so lucky to attend the Academic & Special Libraries Conference in Dublin on the 16th and 17th of February. The title of the conference was The Sociable Librarian: Connecting & Creating Communities To say we enjoyed the experience and came away bouncing with ideas and filled with enthusiasm is an understatement!
Here are our highlights:
After an initial meet and greet with Librarians from all over the country we settled in for the first keynote speaker, the delightful Brenda O'Connell from UL whose talk 'Wellbeing Begins with ‘We’ not ‘Me’: The Benefits of Social Relationships' was extremely thought provoking. She discussed the importance of friendships within the workplace for our mental health, her statistics about the amount of time we actually spend with our co-workers in comparison to time spent with friends and family was staggering, therefore we need to have a good relationship or we'd be pretty miserable! Thankfully here in our library friendships are strong.
The next speaker was Maeve Gebruers from The Irish Traditional Music Archive with 'Reels in the attic: the ITMA story that reached millions' It was such a heartwarming story about the wonderful Anne Gannon, a woman well before her time, who was the first private individual to make tape recordings of Irish traditional music in Ireland. Her incredible archive, which she donated to ITMA was recorded by Anne in a time when even getting electricity to many of the rural communities was difficult, not to mind lugging the cumbersome equipment from house to house. She was some character, and her joie de vivre can be seen in the footage of her interviews, everyone in the audience had a smile on their faces by the end of Maeve's talk!

We had two more speakers Dr Bríd McGrath on Research fellowships as a means of marketing your library and Johanna Archbold with Surveys & smileys at the RCSI Library: UX on double duty. Later we had a lovely wine reception with nibbles, where we got to mingle with librarians and speakers from all over the country.
The next morning we were a little tender as we made our way down for the Keynote speaker Scotty Bonner, but all sluggishness quickly disappeared as we listened to this inspirational librarian. He hailed from a small public library in Ferguson, a town that which became embroiled in protests and riots that began the day after the fatal shooting of Michael Brown by white police officer Darren Wilson on August 9, 2014. The whole town went into shutdown for weeks on end but Scotty decided to adapt the mantra 'if safe, open, if open, we do everything we possibly can'. And boy did he mean everything! They galvanised the whole community, and as the schools were closed they set up desks and tables for teachers who wanted to volunteer, and the children came in and got their lessons, they then extended out to the local hall to accommodate more people, they got food trucks to deliver food for the children..it was incredible! I don't think there was a dry eye at the end of Scotty's talk when he described the night Darren Wilson was acquiited, and the whole town exploded in the worst riots, but the next morning as he came down through the streets where every building had windows smashed .. there standing like a beacon, untouched and perfect. was the library! He truly knows the meaning of being a librarian...and the people of his town were very lucky!
We had a lovely treat during our chosen workshop with two Librarians from UCC Martin O’Connor and Ronan Madden speaking about their radio show 'Shush! Sounds from UCC library'. Their weekly one hour show is broadcast to the UCC Community and beyond via the college broadcaster UCC Campus Radio. Their passion for music was more than evident, and their unique show, which incorporates interviews with librarians and various library issues, is simply inspired. What a fabulous way to engage people from all over the campus and beyond..they have regular listeners and fans from all over the world...be advised by us, in the infamous words of Timothy Leary 'tune in or drop out' :)
Check out this gorgeous shot I got of Martin and Ronan, which I called 'two total charmers' 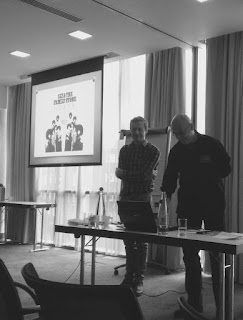 We also went to the workshop by Ester Walsh 'Lessons learned in creating e-learning guides for a law firm' which was fascinating, but due to the fact that it was for a law firm I won't go into anymore detail, except to say we got some great tips and hope to apply them when we set up our own e-learning guides!
To sum up: We had fun, we laughed, we cried, we socialised, Colette even won the raffle!...and we can't wait til next year!
​
Posted by LIT library at 4:12 AM No comments:

Colette Real: Our lovely LSAD Librarian tells us why Christmas was always so special and why she’s a great listener...and a few other titbits to boot! Favourite Childhood Book: Mandy comic book magazine for girls, which was published from 21 January 1967 to 11 May 1991, I got it every weekend. Then every Christmas I would get the Annual, which was the highlight of my Christmas day, reading these by the fire. College Book: The Art of Listening by Erich Fromm, because I used it for one of the first essays I had to write while I was doing my degree in Library and Information Science. Reading this book really increased my ability to listen more to students and staff. Maybe some Politicians would benefit from reading it! Recent Book: On of my favourite recent books is the Girl on the Train, it pulls off a thriller's toughest trick carefully assembling everything we think we know, until it reveals the one thing we didn't see coming. Nail biting to the end. What caught my eye for this book was Train...Witness to murder...Hitchcock...Rear Window. Those words will get me almost every time. Library Memory: On my first day working in LSAD library, a student came in and asked ‘do you have many books?’ I replied that we did indeed and was there one in particular she’d like, and she said ‘just many’..I was a little baffled until further probing uncovered she wanted books on the artist Manet, I have to admit it was hard to keep a straight face! Treaure Island Book: 50 shades of grey...or just give me the lead actor Jamie Dornan and he can keep me company :) . 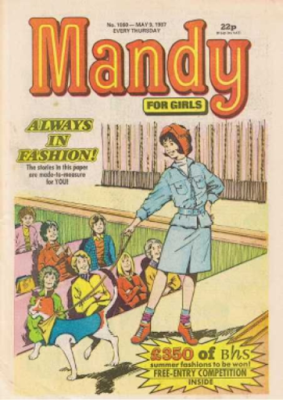 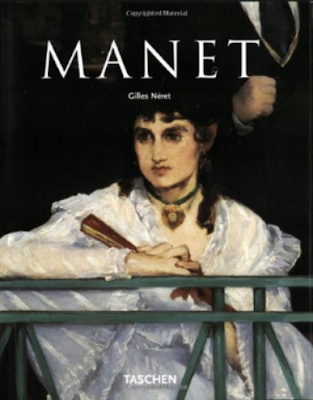 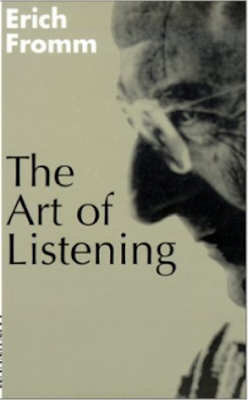 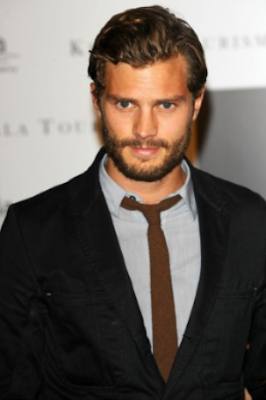 Posted by LIT library at 8:53 AM No comments:

Delighted and excited to have this fabulous book by our very own Tracy Fahey in our library and ready to be borrowed! The Unheimlich Manoeuvre is a collection of short stories based around ideas of the domestic uncanny – the Unheimlich. The stories in this collection don’t fall into the conventional ‘haunted house’ bracket, but explore the psychological horror that occurs when home is subverted as a place of safety, when it becomes surreal, changes, and even disappears… In these stories, a coma patient awakes to find herself replaced by a doppelganger, a ghost estate reflects doubles of both houses and inhabitants, a woman looks for the site of a Gothic atrocity, a suburban enclave takes control of its trespassers, and a beaten woman exacts revenge. Just as the Heimlich Manoeuvre restores order, health and well-being, the Unheimlich Manoeuvre does quite the opposite. 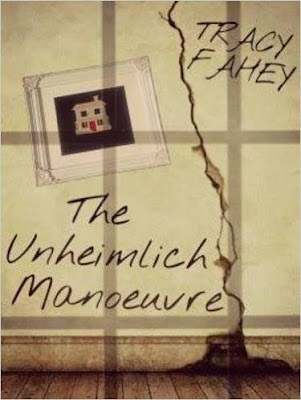 Posted by LIT library at 8:22 AM No comments:

Martin Scorsese discusses faith, film making and his fascination with the giants of Japanese cinema in this months 'sight and sound' journal 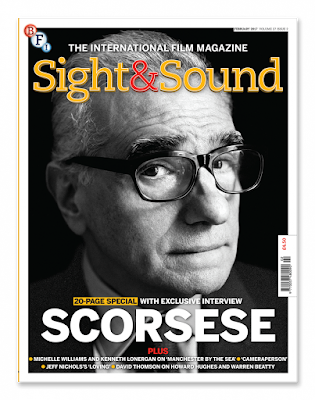 Posted by LIT library at 8:25 AM No comments:

This year's ABLE exhibition is about to kick-off! Are you ready? Artists book(s) ready? Submissions of Artists books will be accepted from 1st Feb to the 14th. There is an entry fee of 3.00 per book and they can be left into Anne in the Library with any special instructions you might have. The Exhibition will take place in the LSAD foyers from 20th Feb to 3rd Mar, 2017. Photobooks, Pop-up books, drawings, sketchbooks, journals, foldovers, altered, Zines........An Artist's book is what you make it....!!! 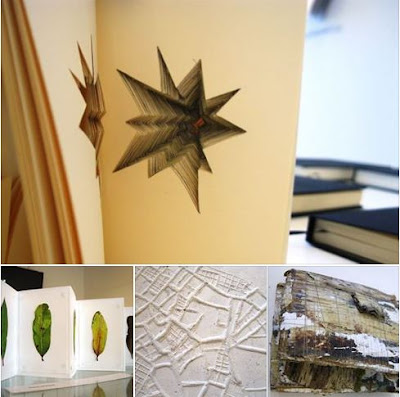 Posted by LIT library at 8:27 AM No comments: